Most major U.S. stock averages ended positive for the week. The S&P 500 rose +0.8% for its best week since, and the Dow was up +1.2% for its best week since June. The tech-heavy Nasdaq was only up +0.1% as growth styles like technology underperformed value styles such as energy and financial, which were the two best sectors for the week with gains +5.0% and +2.3%, respectively. Small-cap stocks were the exception to the positive week as they fell -0.4%. Upward pressure on interest rates continues, with the 10-year Treasury yield rising to 1.61% this week, as persistently high inflation readings have started to spook the bond market. That’s the highest level for yields since June.

In addition to inflation, there are still several clouds hanging over the markets, such as supply chain issues, China credit issues, and geopolitical flare-ups, among others – but one market uncertainty was removed during the week, albeit only temporarily. On Thursday, the Senate passed a bill to extend the debt ceiling by $480 billion until December 3. The bill now moves to the House, where it is expected to be passed early next week. So investors, and the general public, get a few weeks of reprieve from the histrionics and brinksmanship from U.S. lawmakers before the debt-ceiling suddenly becomes a crisis again.

The September Nonfarm Payrolls Employment Report was a bit of a mixed bag. Headline job creation badly missed expectations, as nonfarm payrolls rose 194,000 versus expectations for 500,000 new jobs. Leisure and hospitality, professional and business services, and retail sectors led the job creation. Some of the disappointment was due to the seasonal adjustment which is often buoyed by public schools as districts rehire teachers, bus drivers, and school administrators. But this September those government jobs were a drag on the report. Despite the weak job growth, the unemployment rate fell to 4.8%, better than the forecast of 5.1%. Wages increased sharply, as the monthly wage gain of +0.6% pushed the year-over-year increase to +4.6%. Companies are relying on higher pay to overcome the persistent labor shortage. Regarding the labor shortage, the available workforce declined by 183,000 in September and is 3.1 million shy of where it was in February 2020, just before the pandemic was declared.

U.S. Unemployment Rate
The unemployment rate dropped to 4.8%, better than the expected 5.1%.

The September ISM US Services Purchase Managers Index (PMI) remained well into expansion (a reading above 50) rising to 61.9 from 61.7 in August, and the forecast for a decline to 59.9. The ISM said, “The slight uptick in the rate of expansion in the month of September continued the current period of strong growth for the services sector. However, ongoing challenges with labor resources, logistics, and materials are affecting the continuity of supply.”

The final September Markit US Services PMI was revised up slightly to 54.9 from the preliminary estimate of 54.4, where it was expected to remain. That’s down from 55.1 in August. Markit separates from the ISM and differs because it has less historic value and Markit weights its index components differently and includes small and medium-sized companies.

The September ADP Employment Change report rose by +568,000 private-sector payrolls, above expectations of a 430,000 gain. August data was revised up to 374,000 jobs from 340,000. ADP’s data does not include government jobs, which differs from the broader Nonfarm Payroll report discussed in the Chart of the Week above.

The bond market is closed on Monday for Columbus Day, while the stock market will be open. The unofficial start to Q3 earnings season starts when the big banks begin reporting this week. It is also options expiration on Friday. A big focus for the week will be CPI inflation report on Wednesday. A lot of signs of elevated price pressures will have investors watching for indications that inflation may be more than transitory and spreading beyond the pandemic-related sectors. All of those have the potential to be catalysts for additional choppiness in the markets.

BOAT TO NOWHERE — 73 vessels were anchored and awaiting entry into the ports of Long Beach and Los Angeles on Sunday 9/19/21, an all-time record. An additional 37 vessels were drifting in the ocean within 20 miles of Long Beach and Los Angeles, but far enough offshore to prevent them from successfully dropping an anchor (source: Marine Exchange of Southern California, BTN Research).

(NOT SO) GREAT EXPECTATIONS — 53% of consumers surveyed in August 2021 believe the “average income tax rate” paid by American taxpayers will increase in the next 12 months. The 53% result is the highest level recorded in a monthly survey that has been conducted since 2015 (source: Survey of Consumer Expectations, BTN Research). 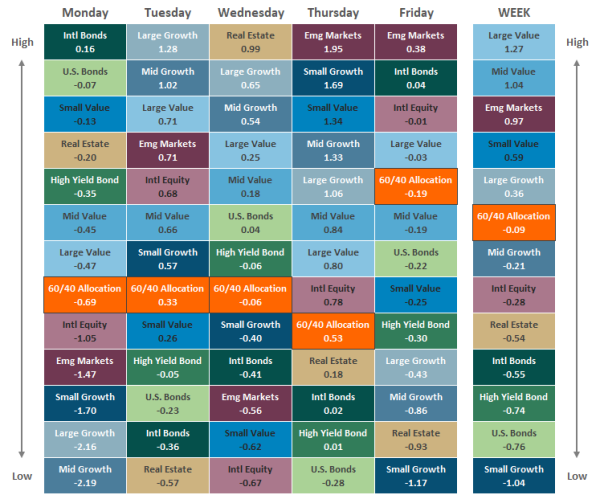