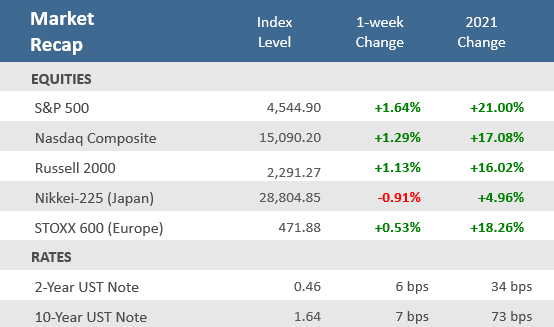 Third-quarter earnings season shifted into high gear over the week, with most companies posting solid quarterly results, helping to propel stock indices to record highs late in the week. According to FactSet, more S&P 500 companies are beating EPS estimates for the third quarter than average and beating EPS estimates by a wider margin than average. So far, with almost a quarter of S&P 500 companies having reported, about 84% are beating earnings estimates which are above the five-year average of 76%. The good earnings news helped propel stocks to all-time highs, with the S&P 500 hitting record highs on Thursday and the Dow Jones Industrial Averages closing the week at all-time highs on Friday. The good earnings results and market sentiment sent volatility down, with the CBOE Volatility Index (VIX) closing at 15.01, its lowest level since February 2020. US bonds were the only negative asset classes for the week, hampered by a resumption in the rise of Treasury rates after a brief reprieve last week. The yield on the benchmark 10-year US Treasury note increased to 1.64% from 1.57% the previous week. The real story for bonds though, was the flattening of the yield curve, in which rates for the short end of the curve jumped more than rates for 10-year and 30-year notes did amid expectations for the Fed to hike rates sooner than expected as inflation pressures persist.

Existing Home Sales surged in September, ending a long stretch in which housing market activity slowed from the hot pace earlier in the year. A late-summer dip in mortgage rates helped spur an uptick in demand. Sales were especially robust at the high end, aided by a rebound in the stock market. The National Association of Realtors said overall existing-home sales rose +7% in September to a seasonally adjusted annual rate of 6.29 million, beating expectations for 6.10 and up from 5.88 million in August. Near-record high prices have made it harder for first-time buyers, as they fell to 28%, the lowest level since July 2015. Many homes are selling above listing price and the supply of homes available for sale remains historically low.

Supply of existing homes for sale at present sales pace 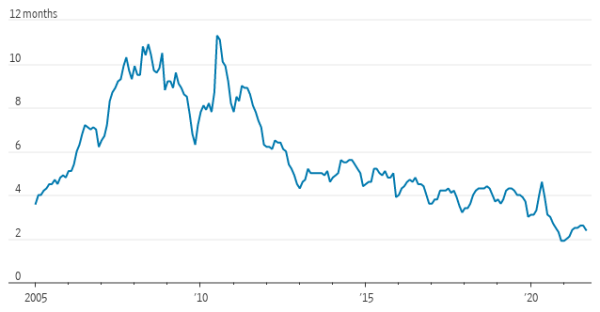 Next week will see a flood of earnings reports with about 30% of the S&P 500 companies set to report profits. There are also some key economic reports on the calendar with Home Prices, Durable Goods Orders, and third-quarter GDP. Personal Consumption Expenditure (PCE) data is out on Friday which includes the Fed’s preferred gauge of inflation. 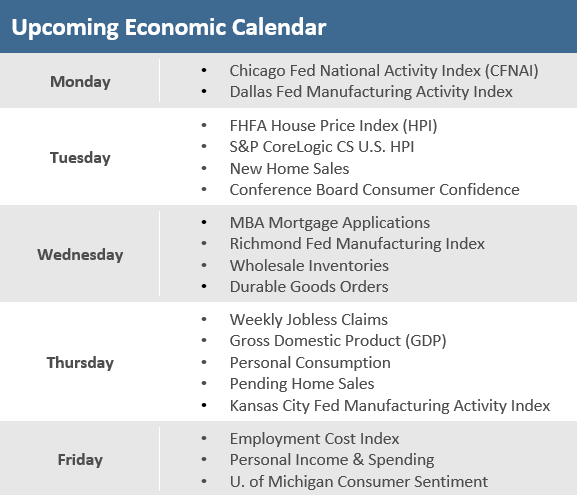 OVER HERE, OVER THERE — In the U.S., prices for food consumed in the home increased 4.5% in September compared with the same month of 2020. In the euro area, prices for food, tobacco, and alcohol were just 2% higher (Source: Eurostat, The Wall Street Journal).

WHEN DID THEY SPEND IT? — An estimated $3.3 trillion of additional cash has been accumulated in bank accounts by American households since the beginning of the pandemic, i.e., cash that would have previously been spent (and not saved) if the pandemic had not occurred (Source: Longview Economics, BTN Research).

DEBT CEILING — On Thursday, October 14, 2021, President Biden signed a debt ceiling bill that adds $480 billion to our existing debt ceiling, bringing the limit up to $28.9 trillion. Current projections have Congress breaching that new limit on Friday, December 3, 2021 (in less than seven weeks), but the actual end date is unknown (Source: Congress, BTN Research).

This week in 1929, William Peter Hamilton, editor of The Wall Street Journal and one of the leading advocates of the “Dow Theory” of technical analysis, predicted the coming demise of the bull market in a lead editorial. Since he had already predicted the death of the bull market in January 1927, June 1928, and July 1928, nobody listened. This time he turned out to be right, as the stock market crashed just three days later. (source: The Wall Street Journal). 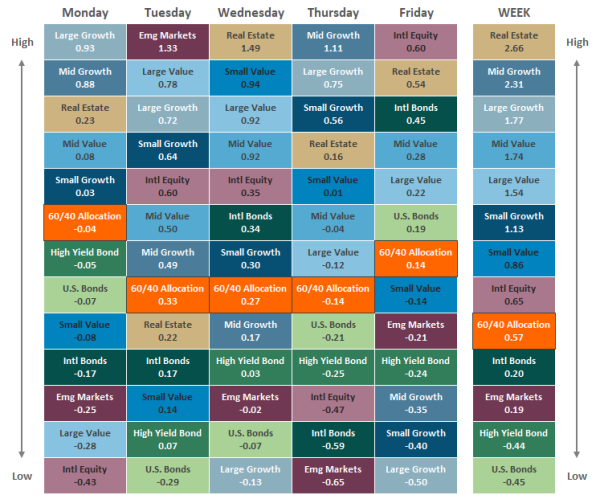