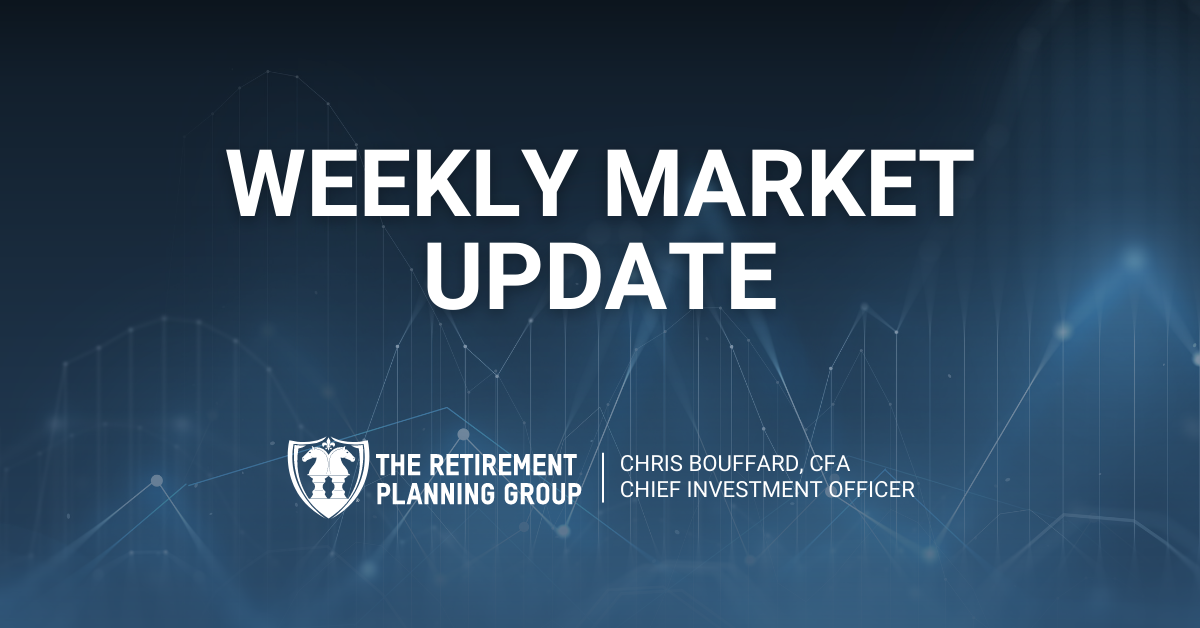 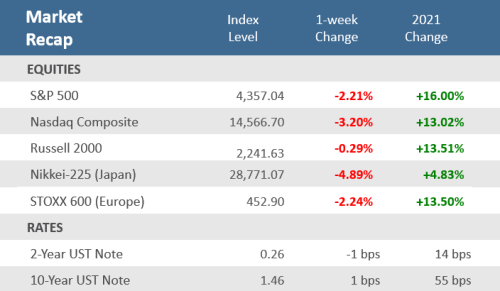 It was another choppy week of trading for equity indices, with most global indices falling -2 to -4%. Yields continued to push higher which sent bond prices lower. U.S. stocks and bonds lost less than their overseas counterparts. Economic reports were heavy over the week in both the U.S. and overseas. A key measure of inflation watched by the Federal Reserve saw its largest annual gain since May 1991. Eurozone inflation was also strong, with its annual increase hitting a 13-year high. U.S. housing prices saw their largest year-over-year increases since data has been collected going back to 1987. Despite the very busy economic calendar, it was Washington that garnered much of the headlines as the US government flirted with a shutdown. Ultimately Congress passed a stopgap funding measure on Thursday to fund the government through early December, but legislators have yet to raise the country’s debt ceiling, which is expected to be reached by the third week of October. Progressive and moderate factions of the Democrat party could not agree on terms of the proposed $3.5 trillion spending bill, with many beltway pundits now expecting that figure to fall to the $1.5 to $2.1 trillion range for eventual passage.

Surging home price gains have spurred concerns that a housing bubble is developing. The July 20-city composite S&P CoreLogic Case-Shiller Home Price Index hit a new all-time high, meeting the year-over-year forecasts for a +20.0% gain, and was up +1.6% on a month-to-month basis. July marked the highest annual rate of price growth since the index began in 1987. Similarly, the separate Federal Housing Finance Agency (FHFA) House Price Index was up +19.2% from July a year earlier, and +1.4% from the prior month. Home prices are a leading indicator and influence shelter costs that account for about a third of the CPI calculations. With a lag of at least a year, gains in these home price indices signal continued upward pressures for CPI inflation. 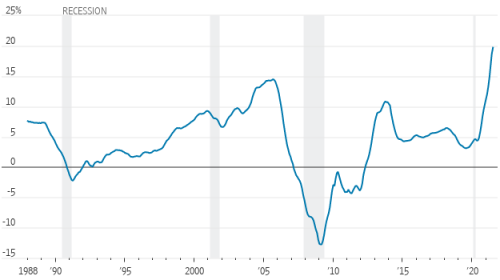 August preliminary Durable Goods Orders were up +1.8% month-over-month, well ahead of expectations for a +0.7% gain, and up from July’s upwardly revised +0.5% gain.

The September Dallas Fed Manufacturing Index unexpectedly fell but remained in expansion territory (a reading above zero), falling to 4.6 from 9.0 in August and far behind forecasts for a rise to +11.0. The September Richmond Fed Manufacturing Activity Index unexpectedly fell into contraction territory (a reading below zero) down to -3 from 9 in August, and far below expectations for a reading of 10. It was the first negative reading since May.

The Conference Board’s Consumer Confidence Index fell to lowest level since February 2021, dropping to 109.3 in September from 115.2 in August (final upwardly revised reading). That was well below expectations of 115.0, and both the Present Situation subindex and the Expectations subindex for the next six months declined. Consumer confidence is still historically high and enough to support further growth in the near-term, but it is now -15% below its June peak.

Pending Home Sales rose +8.1% month-over-month in August, the first time in three months, and crushed estimates for a +1.4% gain. But sales fell -6.3% year-over-year which followed July’s negatively revised -9.6% drop. Sales were robust with increases in all four regions, led by the Midwest and South that were the biggest since June 2020.

August Personal Income was up +0.2%, matching forecasts but is well below inflation so real (inflation-adjusted) income is falling. Personal Spending was up +0.8%, above estimates of +0.7%. The August Savings Rate as a percentage of disposable income was 9.4%. That’s above the historical average but dropped from 10.1% in July and is well below March’s 26.6% level and the all-time high of nearly 34% in April 2020, during the depths of the pandemic.

September US Manufacturing was stronger than expected in both the IHS Markit and the Institute of Supply Management (ISM) Purchase Manager Index (PMI) surveys. ISM manufacturing rose to 61.1 from 59.9 in August, beating expectations for 59.5. The separate IHS Markit manufacturing PMI surveys a broader group of companies than ISM and weights its components differently. It was revised higher to 60.7 from the initial 60.5 estimate. Levels over 50 represent economic expansion so both surveys portend strong, above-average growth.

The September final University of Michigan Consumer Sentiment Index was unexpectedly revised higher to 72.8 from the initial reading of 71, and above 70.3 in August.

August Construction Spending was unchanged from July’s unrevised 0.3% gain, in line with expectations.

Aside from last-minute scrambling to prevent a government shutdown, important economic data being released this week include durable goods, consumer confidence, personal consumption, and the housing markets. To add to the busy economic calendar, there are several Federal Reserve members speaking during the week. 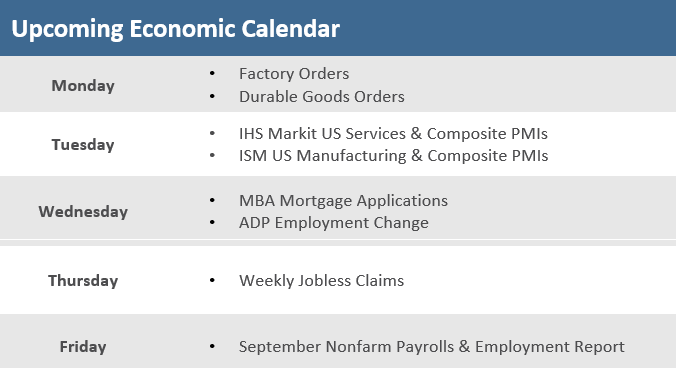 ROAD TO NOWHERE — A global computer chip shortage has slammed the auto sector this year as auto production has plunged by several million vehicles, which has erased billions in revenue for car companies. Originally thought to be a short-term supply crunch, many industry experts are now concerned it is turning into a structural hurdle that may take several years to overcome (source: The Wall Street Journal).

This week in 1720, after hitting nearly 1,000 in the summer, the price of South Sea Co. stock plunged to 180 a share on the London stock market. One legislator proposed tying each South Sea director up in a sack with a monkey and a snake, and throwing them into the river; angry mobs assaulted and nearly lynched stockbrokers in the streets (source: The Wall Street Journal). 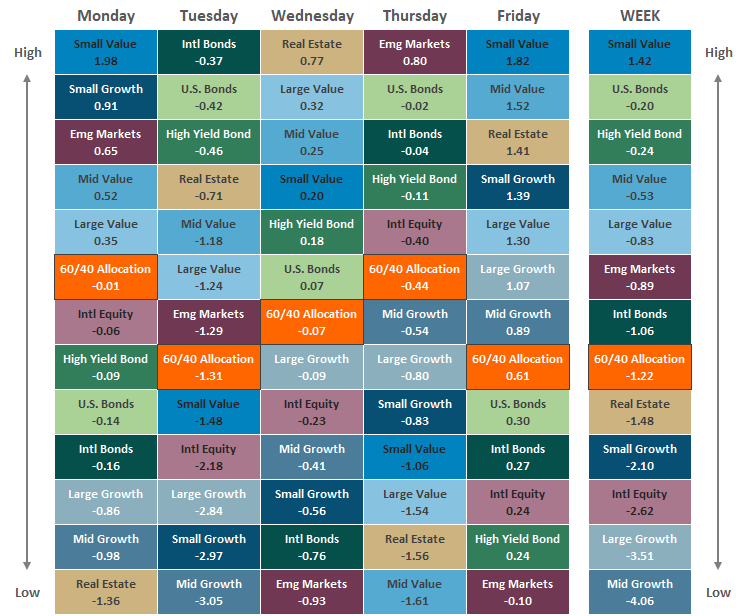