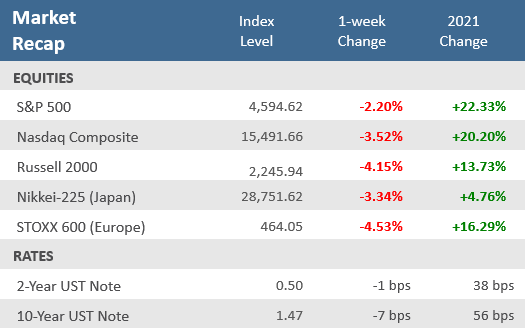 The Thanksgiving holiday-shortened week began with news on Monday that President Biden would renominate Jerome Powell as the Federal Reserve chairman. Initially, stocks cheered the announcement, hitting intraday record levels, but then sold off towards the end of the day. Tech stocks, with higher valuations, were hit harder as investors considered that higher rates with Powell as Fed chair was now more likely. On Tuesday, the Biden administration announced it would release 50 million barrels of crude from the Strategic Petroleum Reserve in a coordinated effort between China and Japan and several other energy-consuming nations to combat the rapid rise in energy prices. However, the announcement had the opposite effect as oil prices rose almost immediately. The last big, coordinated international release in June 2011 saw oil prices initially dip but then move $4.66 higher per barrel within two weeks. An onslaught of economic data was released on Wednesday due to Thanksgiving and a shortened Friday session. Reports mainly were in line or better than expectations, including strong personal income and spending, solid home sales, and tight labor markets.

However, the week’s biggest headlines came on Friday’s shortened session as markets were shaken as a new COVID-19 variant emerged in South Africa. Fears of travel restrictions and perhaps additional lockdowns had investors selling virtually all risk assets. Not surprisingly, the travel and leisure industry and energy sectors were hit particularly hard. The Wall Street Journal reported that the South African strain has a high number of mutations that scientists think may make it more transmissible and able to evade some of the immune responses triggered by previous infection or vaccination. However, initial reports from medical experts in South Africa state that symptoms are mostly mild and may be treated at home.

Inflation rose strongly in October, accelerating at its fastest pace since the early 1990s, according to the Commerce Department’s latest release of the Fed’s preferred inflation gauge, the Core PCE index. Prices for Personal Consumption Expenditures excluding food and energy increased +4.1% from a year ago, its highest rate of growth since January 1991. Including food and energy, the PCE index rose +5%, the fastest gain since November 1990. The upward revisions for the past month suggest inflation is running hotter than realized. Bloomberg economists expect inflation to further accelerate into early next year. Household spending is also surprisingly robust. The combination of higher inflation risks and consumer resiliency means that the likelihood of the Fed accelerating the pace of taper has increased. 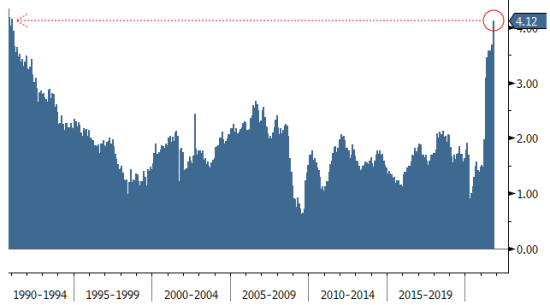 The economic calendar is fairly busy in the upcoming week with Purchase Managers Indices (PMIs) from the ISM and Markit, Home Price Indices (HPIs) from FHFA and S&P CoreLogic, consumer confidence, and vehicle sales, but the big headlines will probably be from the November nonfarm payroll report on Friday. 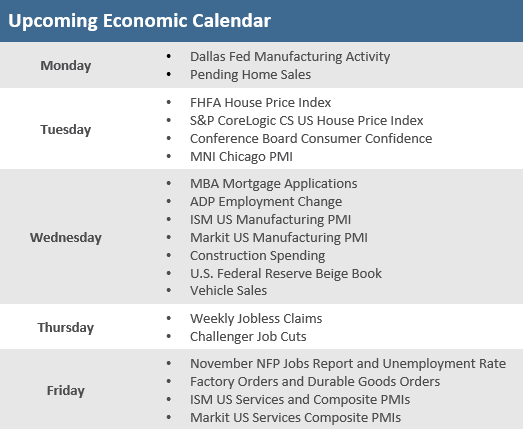 WHEN THE FED LAST RAISED RATES — Between 12/14/16 and 12/19/18, the Fed raised short-term interest rates 8 times (0.25 percentage points each time) and over that period the S&P 500 increased +15.8% (total return including dividends) in aggregate over the 2-years (source: BTN Research).
HAVE TO MOVE QUICKLY — For the 12 months ending 6/30/21, US homes for sale were on the market for a median period of just 7 days before going under contract. That’s the shortest period recorded nationwide in data that has been tracked since 1989 or more than 3 decades (source: National Association of Realtors, BTN Research).
WHAT HAS CHANGED? — Through Sept. 30, central banks around the world have raised interest rates 63 times versus just seven rate cuts in 2021. That compares with 199 cuts against nine increases in 2020 (source: T. Rowe Price, The Wall Street Journal).

This week in 1990, the Shanghai Securities Exchange was re-established in China, 31 years after it was closed by the new Communist regime (Source: The Wall Street Journal). 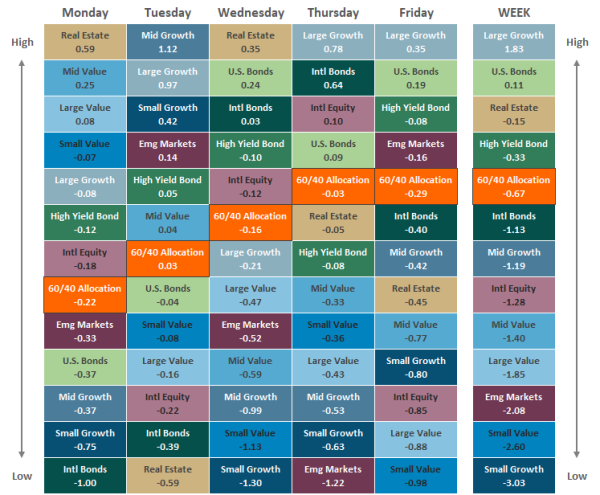