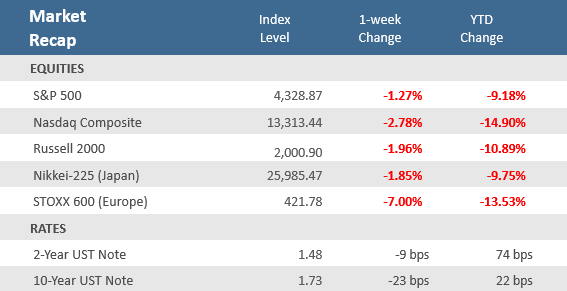 A second straight month of stronger-than-expected U.S. employment data, robust manufacturing activity, strong factory orders, and solid construction spending couldn’t overcome the negative sentiment from a worsening Russia-Ukraine conflict. Markets did rally hard on Wednesday following Congressional testimony by Federal Reserve Chairman Jerome Powell, during which he said he will propose a 25 basis-point (0.25%) hike at the March 15-16 Fed meeting, not the 50 basis-point hike markets had started to price in. But that was the extent of upside for risk assets during the week, as the S&P 500 was down the other four days of the week. Volatility has accelerated as Russia’s invasion of Ukraine has escalated. Wednesday’s +1.9% gain marked the sixth day in the prior seven that the S&P 500 moved more than 1% in either direction. Thursday and Friday were both down, but under that 1% threshold, as news that Russia has seized Europe’s largest nuclear power plant in Ukraine further unnerving already skittish investors. Western nations have imposed waves of sanctions on Russia since their invasion of Ukraine to increasingly isolate them, including cutting several Russian banks from the system that facilitates global money transfers, known as SWIFT. Over the last week, index providers MSCI and FTSE Russell have announced that they will be removing Russian equities from their indices.

The three major global credit rating agencies all downgraded Russia’s sovereign debt to the high-yield category just above default. Many of the oligarchs allied with Putin have also been sanctioned and have had various assets seized, such as properties and yachts. There are concerns that as sanctions targeting Russia expand, Russia may strike back by cutting exports of their vast natural resources and commodities. Russia accounts for 13% of global crude oil production, 17% of natural gas production, and nearly a tenth of global wheat supplies. Any disruptions in those areas could exacerbate already-strained supply chains and spark even higher prices, which have already surged since the conflict began. It is highly uncertain what the ultimate geopolitical and macroeconomic impact will be from the conflict. Still, it is highly probable that it will result in higher global inflation and an erosion of global growth. As we recently communicated to clients, we remain firmly overweight to U.S. equity and bonds, have eschewed emerging market products that invest in non-freedom oriented countries like Russia and China, and continue to mitigate exposure to inflation-susceptible assets. We remain constructive on the U.S. economy, which is coming off its best year of economic growth since 1984, and as detailed below, is still supported by a very strong labor market, a robust manufacturing environment, a solid housing market, and positive corporate earnings. The Russian-Ukraine crisis increases near-term risks and is expected to remain a source of heightened market volatility, but the U.S. economic expansion should persist.

It is important to state that this commentary attempts to objectively review the capital markets and the economic environment and in no way is intending to trivialize the tragic loss of life and humanitarian hardship that the developing war is inflicting on the people of Ukraine. It is our hope that the conflict deescalates as soon as possible and that a peaceful reestablishment of Ukraine can be achieved.

Geopolitics put the economic calendar in the back seat again this week, but there were some noteworthy positive economic reports during the week. Chief among those was Friday’s February nonfarm payrolls and employment report that showed strong hiring and low unemployment, pointing to a healthy post-pandemic labor market. U.S. employers added 678,000 jobs to their payrolls in February, the biggest gain in seven months and well above the expectations for 440,000. As shown in the Chart of the Week, this puts the U.S. just -1.7 million jobs below the jobs level prior to the pandemic. The Unemployment Rate fell to 3.8% from 4.0% last month—below forecasts of 3.9%—putting it closer to the 50-year low of 3.5% just before the pandemic. Wage growth did slow slightly in February but remained near historically high levels. Average Hourly Earnings rose a seasonally adjusted +5.1% in February from the previous year, below the +5.5% gain in January, and below expectations for a +5.8% rise.

The weaker-than-expected wage gains were likely due in part to the fact that many of the jobs added in February were in the relatively lower-paid leisure and hospitality sector (which accounted for 179,000 of the 678,000 new jobs added). This is the last jobs report before the Federal Reserve’s March 15-16 meeting and probably doesn’t do anything to change Fed Chairman Jerome Powell’s statement on Wednesday that he will be recommending a 25 basis point (0.25%) rate hike at that meeting. 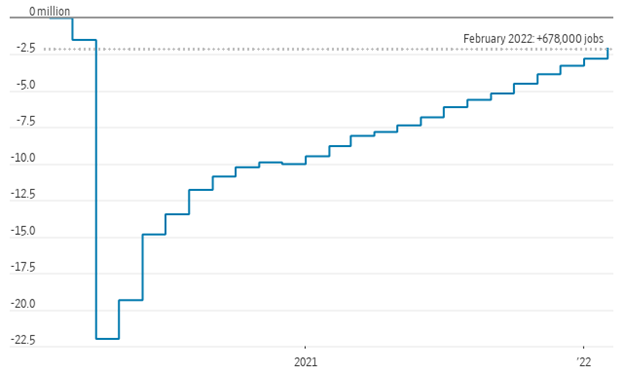 The Russia-Ukraine conflict will likely remain center stage next week with the Fed into its quiet period ahead of its March 15-16 monetary policy decision meeting and the economic calendar relatively light. The February inflation picture will be in focus with the release of the Consumer Price Index (CPI) on Thursday, which forecasts are for it to remain at the highest level in 40 years at a +7.9% annual rate. Other reports that may get attention include the NFIB Small Business Optimism and the preliminary March University of Michigan Consumer Sentiment Index. 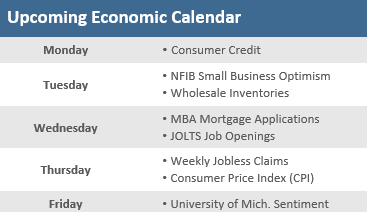 GAS AND OIL – The national average for a gallon of regular gas stood at $3.83 on Friday, the highest since Sept. 21, 2012, according to data from AAA. Americans are paying about 27 cents more than last week, and 41 cents more than a month ago. In California, the state average is now $5.07 per gallon. Surging oil prices are behind the gas price spike, with West Texas Intermediate crude topping $116 on Thursday, the highest level since 2008. More than 50% of the cost of gasoline is based on the price of oil, according to the U.S. Energy Information Administration. Costs associated with refining, distribution, marketing, and taxes make up the rest of the price of gasoline. (Source: CNBC, Bloomberg).

Happy 65th Birthday S&P – On March 4, 1957, Standard & Poor’s Corp. introduced a new stock index, which it initially called the “Standard ‘500’ Index” but is now known as the S&P 500 Index. S&P launched its first stock index back in 1923, but it was S&P 500 that went on to become the primary gauge for U.S. stock performance. The S&P 500 is comprised of the largest 500 U.S. equities chosen for market size, liquidity, and industry group representation. It is a market value-weighted index with each stock’s weight in the index proportionate to its market value. At Friday’s close (March 4, 2022) the S&P 500 was at 4,329, representing a total return (i.e., with dividends reinvested) of 68,429%, or 10.6% annualized, since its inception (Source: Benzinga, Bloomberg). 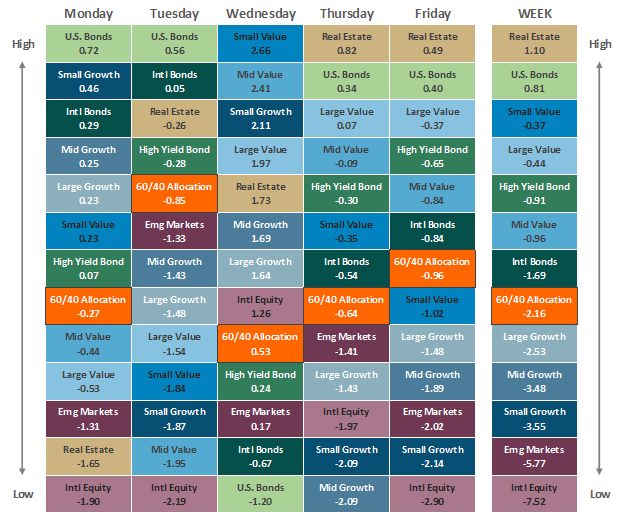