Stocks Have Their Best Two-Week Gain Since Late 2020

The broad U.S. equity indexes pushed higher for a second week in a row. The S&P 500 gained +1.8% over the week, pushing its two-week advance to +8.1%, the best since late 2020. The technology-heavy Nasdaq Composite rose +2%, extending its two-week gain to more than +10%. Even some overseas markets got in on the fun. Japan’s Nikkei-225 was up +4.9% this week on top of last week’s +6.6% rise. U.S. Small-cap stocks and European stocks couldn’t keep up, though, as the Russell 2000 fell -0.4% leaving its two-week return at about +5%, and the STOXX 600 European index slipped -0.2% after last week’s +5.4% gain. The rise of most equity benchmarks came despite casualties mounting in the Russia-Ukraine war and indications that the Fed will be increasingly aggressive with its monetary tightening campaign. The latter was evident as yields on short- and medium-term Treasurys, which are most responsive to Fed policy, rose more than those on longer-term bonds. Indeed, Fed Chair Jerome Powell vowed in a couple of speeches during the week to take action on inflation that he said jeopardizes an otherwise strong economic recovery. As seen in the table above, yields on the 2-year U.S. Treasury note moved up 33 basis points to 2.27%, while the yield on the 10-year note was up 32 basis points to 2.5%, its highest level since May 2019 and likely a reflection that investors are ratcheting up their interest rate expectations.

Economic data was light and mixed for the week. A larger-than-expected decline in weekly unemployment claims sent them to their lowest level since 1969, and continuing claims dropped to their lowest level since January 1970, showing that the labor market is still very strong. Other positives included better-than-expected preliminary global manufacturing and services reports and further expansion in regional Fed economic activity indices. Housing data was a bit disappointing as the recent spike in interest rates appears to be hindering sales, as new and pending home sales both missed expectations with declines, while mortgage applications fell. According to Mortgage News Daily, the average rate on 30-year fixed mortgages shot significantly higher Friday, rising 24 basis points to 4.95%. With both rates and prices considerably higher, the median mortgage payment is now more than 20% higher than it was a year ago. Perhaps the most disappointing report was the worse-than-expected drop in consumer confidence for March, which also showed that 32% of consumers expect their overall financial position to worsen in the year ahead, which is the highest level since the survey started in the mid-1940s. Overall, the economy looks to be slowing yet is still expanding. Rising rates, persistent inflation, and the Russia-Ukraine conflict are all hurdles to watch, but the broad fundamental conditions still support further economic expansion. The recent rally in stocks is likely a reflection of this, but markets are expected to remain choppy with all the financial, economic, and geopolitical crosscurrents out there.

Lawmakers across the U.S. are pushing to pause the collection of gasoline taxes to give drivers a temporary break at the pump as fuel costs hover near record highs. Maryland and Georgia are temporarily cutting state gasoline taxes as fuel prices have surged worldwide amid Russia’s invasion of Ukraine. California is considering giving drivers a $400 rebate to help cushion the blow of high gasoline prices. Lawmakers in Illinois, Massachusetts, Maine, Michigan, Minnesota, New York, and Tennessee are also weighing whether to suspend their state taxes on gasoline. As summer driving season approaches, average prices for regular gasoline have been at record highs the past two weeks after going up for 11 straight weeks. According to weekly figures from the U.S. Energy Information Administration, prices reached $4.32 a gallon on March 14 and were $4.24 according to figures released on March 21.

After a couple of weeks of relatively light economic calendars, next week’s calendar gets busier and may help shed some light on whether the economy can withstand the anticipated aggressive Fed tightening. The week starts slowly with the Conference Board’s Consumer Confidence report, job openings (JOLTS), and some home price indices on Tuesday. However, the back half of the week heats up and will likely command attention with Thursday’s February personal income and spending report and jobless claims for the week ended March 26. A very busy Friday brings the ISM and S&P Global Manufacturing PMIs and the March nonfarm payrolls employment report. There are also a few Fed official speeches during the week. 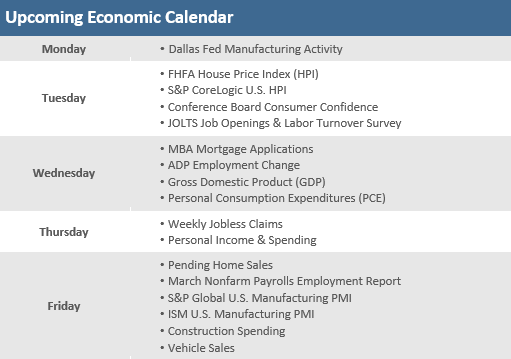 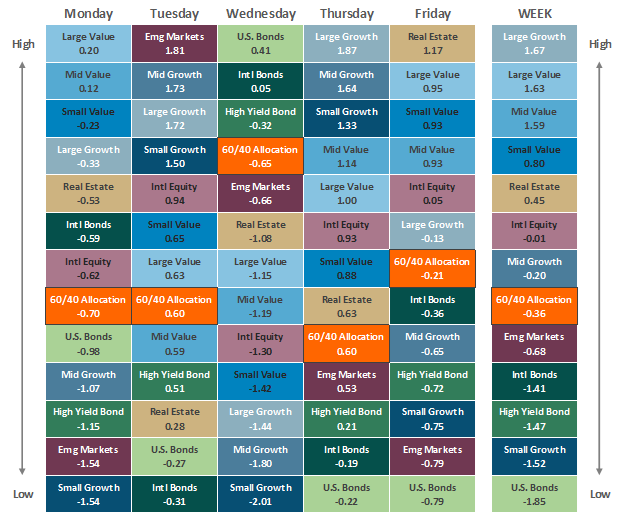