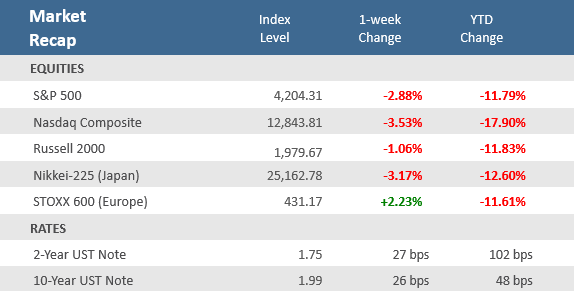 Following several weeks of losses in the aftermath of the Russian invasion of Ukraine, this week saw a strong countertrend rally in technology and growth stocks that helped push stock indices to their best week of the year. The S&P 500 Index was up about +6.2% for the week, the Nasdaq was up +8.2%, and the Russell 2000 small-cap index was up +5.4%. This week’s gains have returned all the major indices to positive territory this month, despite elevated oil and other commodity prices and the continuing war in Ukraine. It’s been more than three weeks since Russia launched its invasion of Ukraine, and Russian artillery attacks continued to bombard residential areas throughout the week. According to reports from the United Nations, Russia has killed 847 Ukrainian civilians since Russia invaded and has forced more than 10 million Ukrainians to abandon their homes. Still, the Russian Defense Ministry showed no sign of letting up even though it appears its own military has taken significant losses. The conflict has weighed down global stock markets until the bounce back this week. Currently, there is no exit strategy or sense of the next set of sanctions.

Investors have also had to contend with the prospects of tighter monetary policy, which, as was widely expected, was confirmed this week with the Federal Reserve launching its rate-hike campaign, raising the target for the fed funds rate by 25 bps. It also establishes a more hawkish tilt by indicating that it sees six additional increases this year and four next year. Regarding the Fed’s balance sheet, Fed chairman Powell indicated that the FOMC discussed quantitative tightening in depth during the week’s meeting and that it could start shrinking its bond holdings as early as May. Treasury yields rose sharply following what looks to be the most aggressive pace of rate hikes in more than 15 years. The yield on the benchmark 10-year U.S. Treasury note settled at 2.15%, up from 1.99% the prior Friday and its highest weekly close since June 2019. The yield curve flattened noticeably which prompted some discussion among market watchers about an increased risk from a Fed-induced recession. But other economic news released during the week showed that the risk of recession in the next twelve months is still relatively low. As shown in the Chart of the Week, the Conference Board’s Leading Economic Indicators index, a composite of 10 forward-looking economic activity gauges, increased in February and is still nicely positive on a year-over-year percentage basis with a robust 8 of the 10 components positively contributing to the February increase. Moreover, the labor market continues to show strength, with weekly unemployment claims doing better than expectations and at levels near historic lows.

The Conference Board’s Leading Economic Index (LEI) rose +0.3% in February, matching expectations, and a nice rebound from January’s negatively revised -0.5% decline. Year-over-year, the LEI was up a healthy +7.6%. The index rebounded from the first negative monthly reading since February 2021. The LEI is comprised of 10 components that tend to precede changes in overall economic activity. February results were robust, with eight of the index’s ten components contributing positively to the rise. The LEI has been a good recessionary indicator, as it has peaked an average of 12 months (and turned negative on a year-over-year basis) prior to the last eight recessions. The Index of Coincident Economic Indicators (CEI) improved +0.4% in February (and +4.0% annually) following a +0.3% January gain, revised down from +0.5%. Each of its four components contributed positively to the increase. However, the Conference Board notes that the latest results do not reflect the full impact of the Russian invasion of Ukraine, which could lower the trajectory for the U.S. LEI and signal slower-than-anticipated economic growth in the first half of the year. 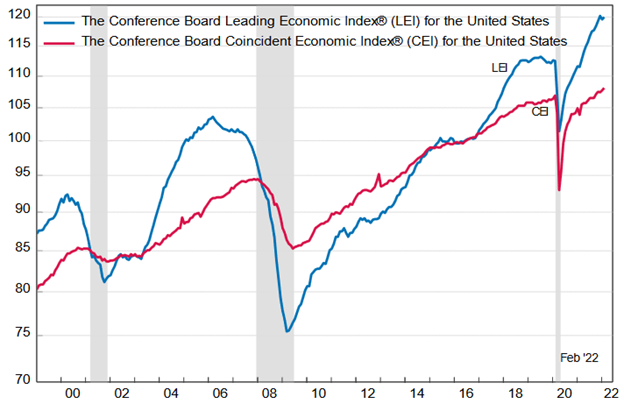 The U.S. economic calendar is relatively light next week, but the focus will continue to focus on the ongoing war in eastern Europe. Economic data that may garner some attention is likely to be the first look at manufacturing and services activity for March via the S&P Global (formerly IHS Markit) Manufacturing and Services PMIs, as well as regional manufacturing activity reports from the Chicago, Richmond, and Kansas City Federal Reserve districts. Housing data continues with the releases of February New Home Sales and Pending Homes Sales on Wednesday and Friday, respectively. Friday also brings the final release of the University of Michigan Consumer Sentiment Index. There are more than a dozen speeches by members of the Federal Reserve, including two from Fed Chairman Jerome Powell who appears at an economics conference Monday and at an international banking conference Wednesday. 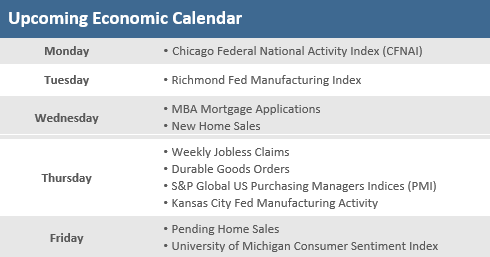 ADDING TO CASH – Money market funds in the United States (including retail and institutional funds, both taxable and tax-free) have increased $799 billion (to $4.6 trillion from $3.8 trillion) over the trailing 24 months as of last Friday 3/11/2022, an average increase of $1.1 billion a day. President Donald Trump declared a national emergency as a result of the pandemic on Friday 3/13/2020 (source: Investment Company Institute, BTN Research).

READY FOR A CHANGE – 27.1 million Americans moved last year, 8.4% of the US population. That’s the lowest percentage of Americans that reported living at a different residence based on an annual survey conducted since 1948. Of the 27.1million movers in 2021, just 4.4 million people moved out-of-state. 25 years earlier (1996), 16.3% of Americans moved in the prior 12 months (source: Census Bureau, BTN Research).

Happy Day – On March 15, 1933, the New York Stock Exchange reopened after having been closed for two weeks during President Franklin D. Roosevelt’s bank holiday. Pent-up investors busted loose in a bullish stampede, whooping and hollering as they propelled the Dow Jones Industrial Average to its biggest one-day percentage gain yet on record, a +15.3% surge to close at 62.10. With the Dow at 34,755 as of Friday, March 18, 2022, it would have to climb more than 5,318 points to break the one-day percentage gain record (source: The Wall Street Journal). 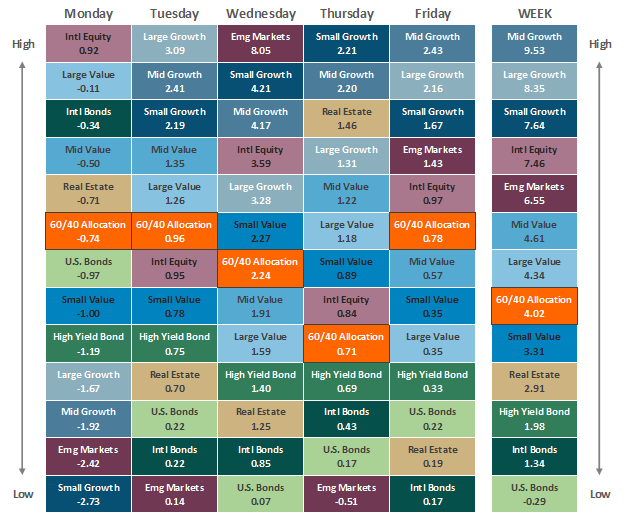