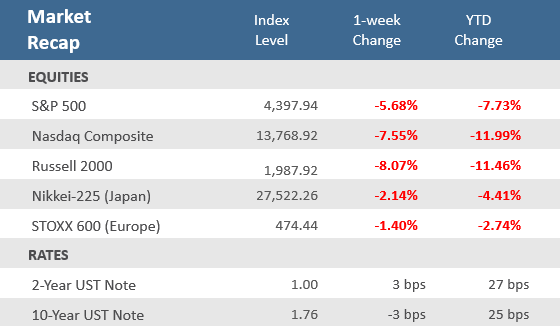 U.S. markets were closed Monday due to the Martin Luther King Jr. holiday, which it turns out was the highlight of the week. Stocks were down every day of the week on their way to their third straight week of losses, and to their worst weekly decline since March 20, 2020, at the depths of the pandemic. The S&P 500 lost -5.7%, but it was the Nasdaq and small-cap stocks that were hit the hardest, sinking -7.6% and -8.1%, respectively. It is the worst start of a year for the Nasdaq since 2008, now down -12% in 2022, which puts the index in correction territory (double-digit drawdowns are generally considered corrections). Rising bond yields are the primary culprit for the sharp downward re-pricing of technology and growth stocks, which get particularly hard hit by higher yields because they rely on low rates to borrow for future investing in innovation and their future earnings look less attractive as rates are spiking. Treasury yields have posted strong gains in 2022 as bond investors anticipate Federal Funds rate hikes, potentially as soon as March. The 2-year U.S. Treasury yield hit 1% during the week for the first time since February 2020. It has risen 0.27% just in 2022 alone. The 2-year Treasury yield is watched as a gauge of where the Fed will set their Federal Funds rate. Yields have risen along the yield curve, with the benchmark 10-year Treasury rising as high as 1.87%, its highest since January 2020, before backing off at the end of the week to finish at 1.76%, putting it up 0.25% in 2022. The 30-year Treasury yield is above 2% again, finishing the week at 2.09%. Investors will be keyed into the Federal Reserve this week as they meet on Tuesday and Wednesday and will release their rate decision and timeline for tightening monetary policy on Wednesday afternoon. The most likely scenario is an announcement confirming that they will end their bond purchasing program by March and signal a 0.25% rate hike for March as well. Some big economic reports could also have the potential to add turbulence with fourth-quarter GDP being reported on Thursday and Personal Consumption Expenditure data on Friday (which includes the Fed’s favorite inflation measure). And if that wasn’t enough noise in the markets, this week will be a very heavy week for corporate earnings reports with prominent tech companies like Microsoft, Tesla, and Apple reporting, as well as numerous blue-chip stocks, such as 3M, IBM, Intel, Caterpillar, and American Express. Buckle up, with all those headline-producing activities, and investors already jittery, the potential for more choppiness is high.

December Existing Home Sales fell, snapping a three-month winning streak, as the U.S. housing supply hit a record low. December’s existing-home sales dropped -4.6% month-over-month to an annual rate of 6.18 million units, below expectations of 6.42 million units, and November’s upwardly revised 6.48 million rates. It was a -7.1% drop from last December. Existing home sales were lower in all four major U.S. regions both on a month-over-month and year-over-year basis. The Median Existing Home Price was up +15.8% from a year ago to $358,000, marking the 118th straight month of annual gains. Unsold inventory was at a 1.8-months pace at the current sales rate, down from the 2.2-months pace a year earlier. National Association of Realtors Chief Economist Lawrence Yun said, “December saw sales retreat, but the pull-back was more a sign of supply constraints than an indication of a weakened demand for housing,” adding that, “Sales for the entire year finished strong, reaching the highest annual level since 2006.”

The supply of homes for sale fell to a record low in December
U.S. existing homes available for sale at end of month 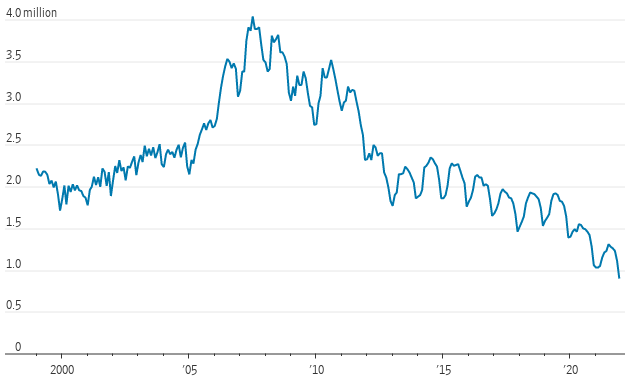 The big event for markets this week is the Federal Reserve’s meeting Tuesday and Wednesday. The Fed is not expected to raise interest rates or change policy at this meeting, but it is expected to remain hawkish and could signal that its first interest rate hike will come in March when it finishes up its bond-buying program. Important economic data in the week ahead include fourth-quarter GDP on Thursday and Friday’s personal consumption expenditures data, which includes the Fed’s preferred inflation measure. Earnings season is also in full swing with Microsoft, Tesla, and Apple reporting Tuesday, Wednesday and Thursday, respectively. There are also a host of blue-chip stocks reporting, such as 3M, IBM, Intel, Caterpillar, and American Express. 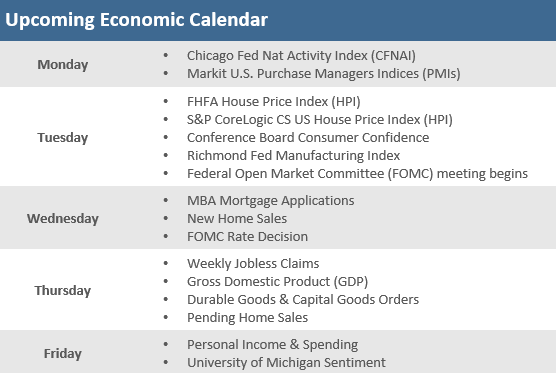 YEAR TWO IN THE WHITE HOUSE — This year (2022) is the 2nd year of Joe Biden’s 1st 4-year presidential term. The S&P 500 index has been positive on a total return basis during 15 of the last 24 “presidential 2nd-years,” i.e., 2nd-years dating back to 1929. The average performance for the S&P 500 index during the last 24 “presidential 2nd-years” has been a total return of +6.7% (source: BTN Research).
RUSH TO BUY — Americans borrowed a record $1.61 trillion from mortgage lenders in 2021 to purchase homes, breaking the previous record high for purchase loans of $1.51 trillion set in 2005. The purchase loan total does not include individuals who refinanced existing mortgages (source: Mortgage Bankers Association, BTN Research).
JUICED — Frozen concentrated orange-juice futures ended Friday at about $1.50 a pound, up roughly +50% since the pandemic began. Government agricultural forecasters said they expect the smallest Florida orange crop since World War II, touching off a rally in juice futures that were already at their highest level in years (source: The Wall Street Journal).

On January 18 in 1956, after more than a half-century as a private company, Ford Motor went public when the Ford Foundation sold 10.2 million shares at $64.50. Ford stock has gained more than +150% in the past 12 months, compared with gains of around +23% for the S&P 500 index, powered in part from an aggressive new electric vehicle strategy (source: The Wall Street Journal). 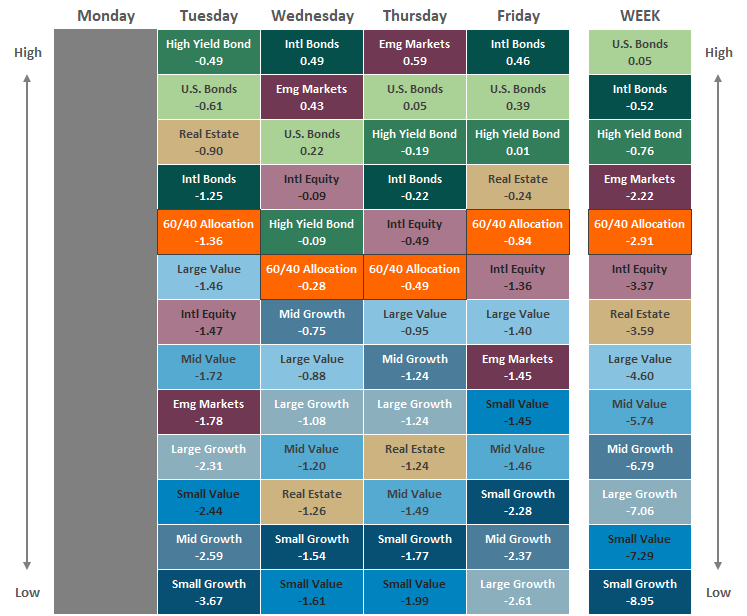