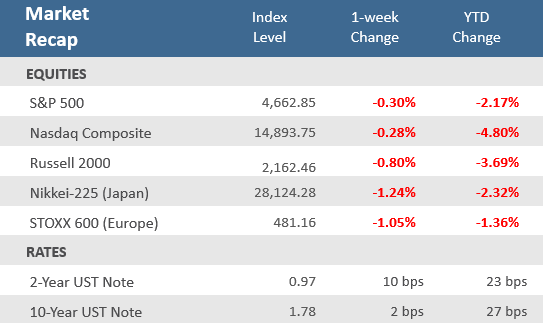 Most major indexes fell for the second straight week but finished well off the lows of the week. It’s been a shaky start to 2022 after tech and growth stocks fell sharply in the first week of the year as the Fed shifts to a more aggressive policy stance to combat inflation. The primary gauge of consumer inflation, the Consumer Price Index (CPI), hit +7%, its highest annual rate since 1982. In his confirmation hearing before the Senate Banking Committee on Tuesday, Federal Reserve Chairman Jerome Powell expressed resolve on the fight against inflation without appearing panicked. Despite the headline-grabbing CPI report, other inflation measures came in somewhat softer. The Producer Price Index (PPI) is a measure of wholesale prices, which had been leading the CPI higher for months. But the December PPI came in under forecasts and lighter than November’s level. Likewise, the Labor Department reported that Import Prices also unexpectedly decreased in December, down from November’s rate, and the first decline since August of 2021. The slowdown in PPI and import prices provide some hope that the inflation surge may be peaking.

Other economic data for the week was softer-than-expected as well. Consumer sentiment declined more than expected, retail sales were well below economists’ consensus forecasts, and industrial production and capacity utilization came in light. The market’s focus in the coming week will turn toward fourth-quarter earnings, which are expected to be up about +22.4%, according to Refinitiv estimates, capping off a remarkable 2021 where overall earnings will be up approximately +49%. Corporate profits will be critical to keeping the market ascending. That 2021 earnings growth rate is bound to be a highwater mark, but 2022 is still shaping up to be a very healthy, single-digit growth year in line with historical averages.

The last time U.S. inflation was this high, the hot new personal computer was the Commodore 64, the U.S. government broke up AT&T, and E.T. and Fast Times at Ridgemont High were leading at the box office. The Consumer Price Index (CPI), the main inflation gauge of U.S. consumer goods, jumped +7% on an annual basis in December. That was the highest reading since 1982. The eighth straight month of consumer inflation is higher than +5%, and the third consecutive month above +6%. Meanwhile, the Producer Price Index (PPI), a measure of inflation for wholesale goods, was up +9.7% from last December, slightly below the record +9.8% annual rate recorded last month. In his confirmation hearing on Capitol Hill on Tuesday, Fed Chairman Jerome Powell emphasized that he will use all the central bank tools to get inflation back on track. “If we have to raise interest rates more over time, we will,” Powell told the Senate Banking Committee. “The economy no longer needs or wants the very accommodative policies we have had in place.” 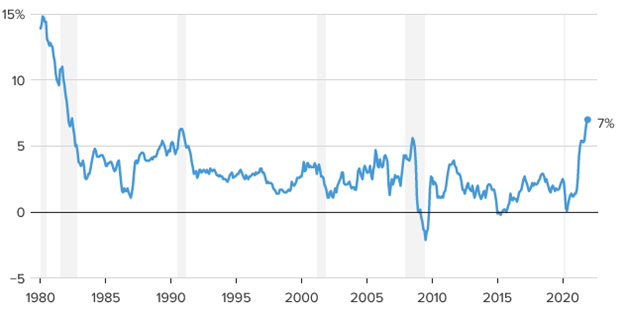 Next week, the economic calendar is very light, with the Martin Luther King Jr. Day observance on Monday and no major releases on Friday. The majority of the release are housing-related with Builder Confidence on Tuesday, Mortgage Apps, Housing Starts, and Building Permits on Wednesday, and Existing Home Sales on Thursday. The regional Empire State (N.Y.) Manufacturing data, Philly Fed Outlook, and Weekly Unemployment claims round out the schedule. The Treasury market may also be quieter in the four-day week because Federal Reserve officials are in a quiet period ahead of their two-day meeting beginning January 25. 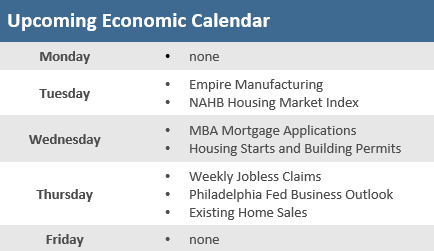 ON BALANCE — Stocks have historically performed well in the months leading up to the first rate increase of a cycle and in the months just after the first hike. Since 1983, the S&P 500 has risen an average of +5.3% in the three months before the first Fed interest-rate increase of a cycle, followed by an average of +5.3% over the next six months (source: UBS Group, The Wall Street Journal).

PROTECTING THE DOWNSIDE — There were more put option contracts outstanding (more than 200 million) at the end of 2021 on U.S. individual stocks, ETFs (exchange-traded funds), and stock indices than at any time in history based on records maintained since 2009 (source: CBOE Global Markets, BTN Research).

On January 10 in 1910, Joyce C. Hall, a teenage boy from Norfolk, Nebraska opened a new business, storing his inventory in a room at the YMCA in Kansas City. He began selling illustrated postcards by mail-order but soon hit on the idea of what he called “greeting cards.” He did $200 in business his first two months, and Hallmark was born—making prepackaged emotion and good wishes a part of American life (source: The Wall Street Journal). 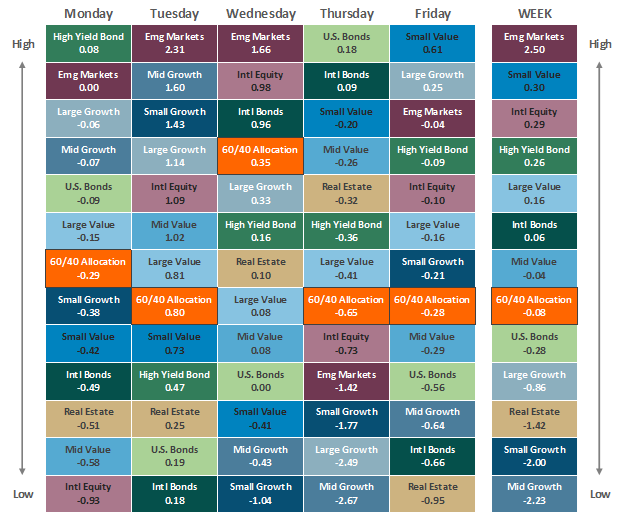