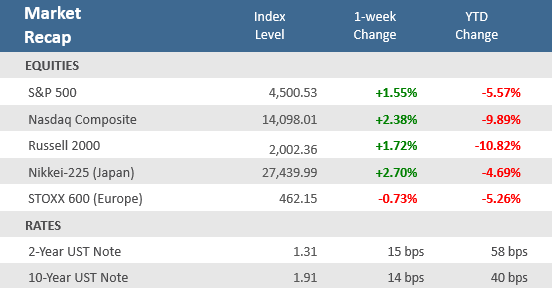 Stocks end best week of the year so far, buoyed by jobs report

After falling into correction territory (-10%) in late January, the S&P 500 stabilized last week, rising in four of the five days to end the week with a +1.6% gain – its best week of 2022. The win streak from 1/28/22 – 2/2/22 was the first four-day win streak since late December. In fact, January’s sole winning streak for the index was back-to-back gains on Jan 11th and 12th. Even with the rally early this week, the markets continue to cope with the economic and earnings implications of a more aggressive Fed. On Thursday, the S&P 500 sank -2.4%, its worst single-day drop since February 25 of 2021, highlighting the skittishness of investors in the new regime of heightened volatility. Thursday’s selloff was courtesy of very disappointing earnings and guidance by Meta Platforms (Facebook’s parent company). However, after the close Thursday, Amazon reported much stronger-than-expected earnings and guidance, that helped turn investor sentiment more positive for Friday’s session. In addition to cheering Amazon’s earnings, Friday brought a much stronger-than-expected January jobs report, which showed 467,000 new jobs added to the economy in January when only 125,000 were expected (and some economists were forecasting job losses in January). The technology-heavy Nasdaq Composite Index was down nearly twice as much as the S&P 500 in 2022, but bounced back more strongly during the week, advancing +2.4% despite plunging -3.7% on Thursday (its worst day since Sept 8, 2020).

The strong jobs data sent Treasuries yields sharply higher, as the rate on the 2-year Treasury note hit the highest since March 2020 and the yield on the 10-year note touched a level not seen since the end of 2019. Of course, bond prices decline as yields go up and the Bloomberg U.S. Aggregate Bond Index declined in four of the five days last week, closing the week down -1.0%, its fourth weekly decline in 2022. The headline bond index is down -3.0% in 2022 after falling -1.5% in 2021, which was its first negative year since 2013. And it’s not just the U.S. Federal Reserve that is taking a more aggressive stance against rising inflation. On Thursday the Bank of England raised interest rates for the second consecutive meeting for the first time since 2004, and inflation in the eurozone surprised markets with a stronger than expected reading that may further pressure European Central Bank to take action soon.

There was a lot to digest for labor market data during the week. Wednesday’s ADP Employment Change Report showed private sector companies cut -301,000 jobs in January, far below the Bloomberg consensus estimates for a +180,000 gain. It was the first time ADP reported negative job growth since December 2020. Moreover, December’s gain of +807,000 jobs was revised lower to +776,000. ADP said, “The labor market recovery took a step back at the start of 2022 due to the effect of the Omicron variant and its significant, though likely temporary, impact to job growth.” The surprisingly poor ADP results had markets preparing for a negative surprise with Friday’s key Nonfarm Payrolls employment report. However, the Bureau of Labor Statistics (BLS) reported a surprisingly robust gain of +467,000 jobs in January, well above the expectations for a +125,000 gain, and December was adjusted decisively higher to an increase of +510,000 from the initial reading of a +199,000 gain. Meanwhile, the Labor Force Participation Rate also rose solidly to 62.2% from December’s unrevised 61.9%, in line with expectations. Leisure and hospitality led the gains, while professional and business services and retail also posted big numbers. The unemployment rate did rise slightly to 4%, up from December’s 3.9% where forecasts expected it to remain. Wage pressures persist with Average Hourly Earnings increased +0.7%, above expectations for a rise of +0.5%, which is also where December’s downwardly revised level was. The conflicting ADP and BLS jobs data will keep the market and Fed focused on future reports for clarity on the health of the labor market and impact of wages on inflation as payrolls get close to reaching their pre-pandemic highs.

Payrolls jump a surprising +467,000 in January despite omicron surge
Difference in total U.S. employment from pre-pandemic levels in Feb. 2020

After a few weeks full of economic reports, the upcoming week will be relatively light. After January’s surprisingly strong jobs report, focus swings to consumer inflation with Thursday’s CPI report. Another high CPI print could add further pressure on the Fed to be aggressive with its rate hikes and balance sheet reduction plans. Bloomberg Economics estimates CPI to hit a +7.3% annual rate. Q4-2021 earnings season has passed the halfway point, but the calendar remains full of companies releasing earnings including Coca-Cola, PepsiCo, Kellogg, Walt Disney, and Pfizer.

UNHAPPY MEAL — Inflation is coming to a longtime refuge of price-conscious consumers: restaurant value menus. Burger King, Denny’s and Domino’s Pizza are among the chains that are reducing their menu of discounted items or shrinking portions to try to improve their profits. Prices for food away from home rose 6% in 2021, the biggest increase in nearly four decades (source: The Wall Street Journal).

On January 31 in 1940, the first monthly Social Security check was issued to Ida May Fuller, a 65-year-old retired legal secretary in Ludlow, Vt. Because Social Security launched only three years before she retired, Ms. Fuller had paid a cumulative total of only $24.75 in Social Security taxes. But her initial monthly check was $22.54—and, by the time she died in 1975 at the age of 100, she had collected a total of $22,888.92 in benefits, nearly 1,000 times what she paid in (source: The Wall Street Journal). 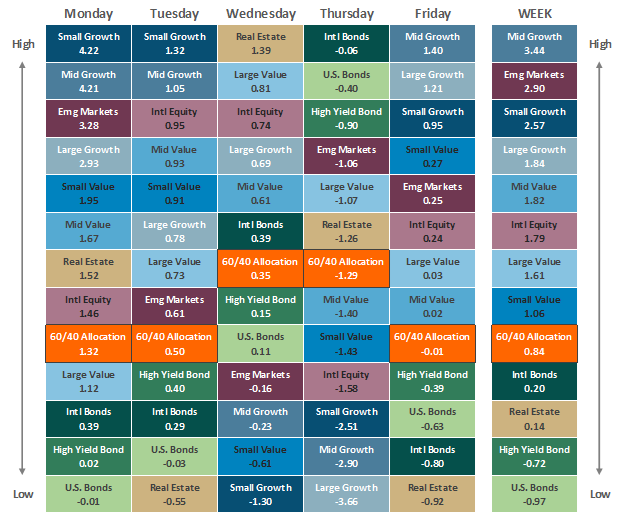