Not many strategists had a war in Europe as part of their 2022 outlooks at the start of the year, but after weeks of military positioning, Russia launched an invasion into Ukraine early Thursday morning. The assault took place throughout Thursday and Friday, both on the ground and through the air, with explosions and missile strikes across several key Ukrainian cities, including its capital, Kyiv. In response, President Biden vowed to impose a wave of sanctions on Russia in an effort to cut Moscow off from the global economy, which would target trillions in assets and include measures against top Russian oligarchs and some Russian state-owned enterprises. The U.K. and the European Union also agreed to sanctions that will target the financial, energy, and transportation sectors. Not surprisingly, financial markets reacted swiftly and sharply to the invasion, with stock markets falling hard and commodity prices soaring along with safe-havens, like Treasurys and gold. However, U.S. equities were able to stage a stunning reversal higher from sizable losses early in Thursday’s session. The S&P 500 and Dow Jones Industrial Average actually opened in correction territory (-10% from their all-time highs earlier this year), while the Nasdaq Composite opened at bear market levels (-20% for all-time highs in November 2021). The Cboe VIX Volatility Index spiked above 37 on Thursday, near hits highest levels of the year. However, in the afternoon, stocks staged a massive comeback, and the S&P erased a -2.6% decline to finish up +1.5%. The Dow erased an 859-point decline and finished up 92 points. The Nasdaq had the most stunning reversal, from an early -3.5% drop to a +3.3% gain at the close.

The rally continued Friday as some reports indicated that President Putin might be willing to hold high-level talks with Ukraine. The S&P added +2.2% on Friday to close the tumultuous week a gain of +0.8%, while the Nasdaq added +1.6% for a +1.1% weekly gain. The small-cap Russell 2000 Index added +1.6% for the week. The market rebound notwithstanding, Russia’s invasion of Ukraine adds new risks to a global economy already challenged with mounting inflation and supply-chain disruptions. It’s too soon to really know the economic impact of the Russian-Ukraine conflict; much will depend on the scale of the fighting and the new sanctions that the U.S. and its allies have promised. On one hand, Russia and Ukraine are major global providers of commodities, and the war there could further exacerbate inflation pressures which the Fed is already pressured to reign in. On the other hand, a material economic slowdown in Europe could prompt the Fed to dial back plans to tighten monetary policy aggressively.

Purely from an economic context, U.S. consumption is still healthy and economic growth is still solid. The Q4-2022 earnings season is poised to post the fourth-straight quarter of 30.0% or better annual growth. And, as detailed below, the economic data is on balance still coming in better than expected. Clearly, the situation in Ukraine is fluid and uncertain, but the current evidence suggests the U.S. economy is still in mid-cycle expansion with solid fundamentals.

On Thursday, while the financial markets were still reeling from Russia’s invasion of Ukraine, we published a client message titled “Russia Invades (Again),” which included a table and statistics regarding the market reaction to past geopolitical events and the subsequent post-event performance outcome over different periods. As we noted, history has consistently shown that investors benefit from staying invested, even during uncertain and frightening crisis events. To illustrate this in a more visual context, here is a chart from First Trust of the S&P 500 Index since 1928 with several of the major wars and geopolitical conflicts over the years since.

Market attention will obviously continue to focus on the Russian invasion of Ukraine and the geopolitical fallout. Outside the geopolitical realm, a big focus will be the views of Federal Reserve Chair Jerome Powell when he appears before both the House and Senate banking panels on Wednesday and whether the Russia-Ukraine conflict softens his hawkish commentary following the January Federal Open Market Committee (FOMC) meeting. It’s a relatively light week for economic data. Competitors Markit and ISM will release their respective Purchasing Manager Indices (PMI) on Tuesday and Thursday. The big event will be the February employment report on Friday which is likely to show further increases in employment and a drop of the unemployment rate back to 3.9%. 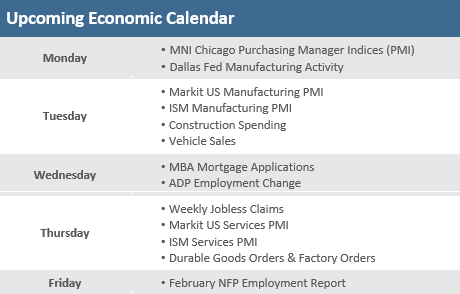 NEW WHEELS – The average price of a new vehicle purchased in the United States in December 2021 was $45,743, an all-time high (source: J.D. Power, BTN Research). 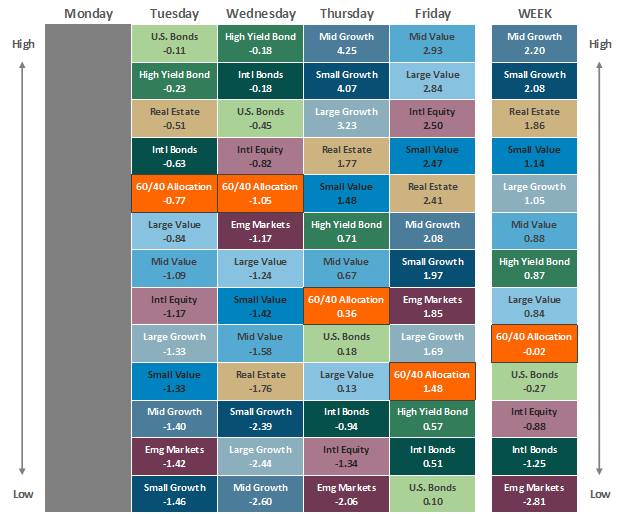