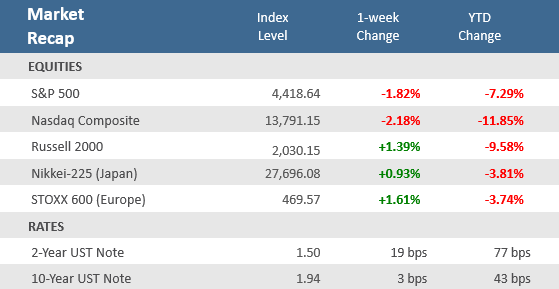 The choppy back-and-forth trading that has characterized most of 2022 continued into last week. However, for the first half of the week stocks were, on balance, drifting higher. At the close Wednesday, the S&P 500 was up nearly +2% for the week. And even after dipping on a hotter-than-expected consumer inflation report on Thursday morning (see the Chart of the Week for more details), stocks regained their footing and cruised back to the highs of the week and looked like they were headed for a third straight week of gains. But then late Thursday morning Federal Reserve Bank of St. Louis President (and FOMC voter) James Bullard told Bloomberg news that he supports the Fed hiking rates by 100 basis points (1%) by July, including a 50-basis point hike in March. Despite brushing off the hot inflation data earlier, the market quickly rolled over following these extremely hawkish comments. Treasury yields spiked by the end of Thursday with the yield on the 2-year note surging 24 basis point to 1.58% (a rare 7 standard deviation move), while the 10-year Treasury yield rose 10 basis points to 2.03% ¬– the first time since 2019 it was above 2%. By the end of day, the S&P 500 had fallen -1.8%, back to where it started the week, and the tech-heavy Nasdaq Composite index was down -2.1%. Stocks tried to stabilize early Friday, even with disappointing consumer sentiment data being released early in the morning, but then markets were delivered another blow for the second consecutive day after National Security Advisor Jake Sullivan acknowledged there was a “distinct possibility” that Russia could invade Ukraine before the end of the Olympics. Stocks moved sharply lower in the final hours of trading and Treasury yields, after spiking the day before on the Bullard comments, gave back a good portion of Thursday’s advance as investors bid up ‘safe havens’. At the end of Friday, the S&P 500 had slid another 1.9% to end the week down -1.8%. The Nasdaq plunged -2.8% of Friday, taking it down to -2.2% for the week. The small cap Russell 2000 Index was outperformer, losing -1.0% Friday to remain positive +1.4% for the week. The 2-year Treasury yield finished at 1.5% while the 10-year closed the week at 1.9%. Schwab’s Chief Global Investment Strategist Jeffrey Kleintop points out that markets have historically shrugged off geopolitical events involving Russia and that Russia makes up a very small portion of the main global and emerging market indexes, while Ukraine has no exposure in such indexes. In the short-term though, an already skittish market will likely be susceptible to headline risks coming from the Russia-Ukraine turmoil. Domestically, it is important to keep an eye on fundamentals, and on that front, with earnings for Q4-2021 winding down, and 359 of the S&P 500 Index companies reported, 68.7% have topped revenue estimates and 76.8% have bested earnings expectations. Compared to last year, revenue growth is on pace to be up nearly +16.4% and earnings expansion is on track for about +26.9%. And so far companies are growing those earnings while largely maintaining profit margins, despite the inflationary pressures in wage and input costs. According to data from J.P. Morgan, S& P 500 companies are tracking to have profit margins of 13.2% for Q4, which is not far off from the record 13.6% recorded in Q2-2021.

January consumer inflation was surprisingly strong, accelerating at a 40-year high of 7.5% annually. Strong consumer demand and pandemic-related supply constraints continued to push up prices in January as the January Consumer Price Index (CPI) rose +0.6% month-over-month, beating expectations for a +0.4% increase, and matching December’s upwardly revised gain. Core CPI, which excludes food and energy, also came in at a +0.6% rate, ahead of expectations for a +0.5% gain, also matching December’s (unadjusted) increase. Compared to last January, prices jumped +7.5% higher, which was the fastest since 1982 and above forecasts for +7.3% and December’s +7.0% rise. Core CPI up +6.0% from last year, also a 40-year high—and above forecasts for a +5.9% increase and December’s unrevised +5.5% rise. As shown in the Chart of the Week below, prices were up sharply for a number of everyday household items, including used vehicles, fuel, furniture and electricity. A sharp uptick in housing rental prices—one of the biggest monthly costs for households—contributed to January’s increase.

U.S. Inflation Rate Accelerates to a 40-Year High of 7.5%
Consumer prices, change from one year earlier

Investors aren’t likely to get a reprieve from choppy markets in the upcoming week. Markets were headed for a positive week last week until St. Louis Fed President James Bullard amplified hawkish comments on Thursday, and then Friday afternoon brought reports that Russia appears to be on the verge of invading neighboring Ukraine. Those headlines triggered stocks to sell off and overwhelm the week’s gains. This week brings more inflation data with Producer Prices on Tuesday, as well as Import Prices and the release of minutes from the Fed’s last meeting on Wednesday. St. Louis Fed President James Bullard, who’s hawkish comments sunk the market last Thursday, will be on CNBC’s “Squawk Box” Monday. Retail Sales will be reported Wednesday and Leading Economic Indicators on Friday. A full slate of housing data is also coming with the NAHB Home Index, Building Permits, Housing Starts and Existing Home Sales. Q4-2021 earnings season is winding down but there are still some major reports, including Cisco, Deere, Nvidia, Marriot and Walmart.

DEUCES ARE WILD — On Wednesday 2/02/2022 in a pro basketball game against the New York Knicks, Memphis Grizzlies NBA player Desmond Bane (jersey # 22), shot 4 of 18 from the field (22.22% shooting percentage), had 2 assists, 2 turnovers, 2 steals and 2 blocked shots. Bane is in his 2nd NBA season. He made the All-Rookie Second Team following his first year in the league (source: Adam Price Research, BTN Research).

SAVE A HORSE, RIDE A TRACTOR – On February 7, in 1804, John Deere was born in Rutland, VT. In 1837, he threw the American frontier wide open by inventing the world’s first self-cleaning steel plow, making it possible for pioneers to work the rich, vast farmlands of the midwestern and western United States. He also penned the quote “Strike while the iron is hot.” (Source: The Wall Street Journal). 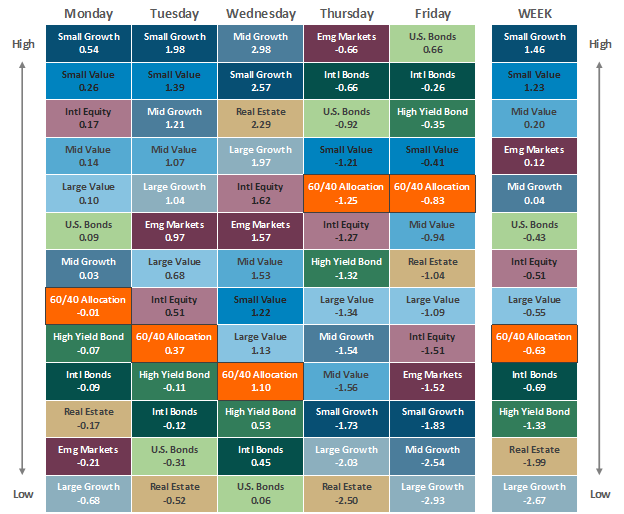