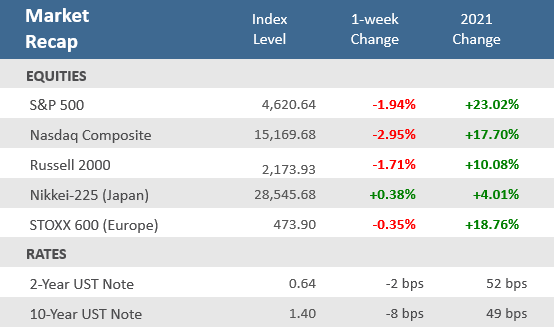 Two of the more prominent themes of the week were the continued rapid spread of Omicron and the Federal Reserve’s announcement that it would unwind its asset purchase program at twice the rate it previously projected to help fight inflation. The S&P 500 fell four out of five days on its way to a -1.9% weekly decline, which was its fourth negative week in the last five. Growth stocks were hit particularly hard, and the technology-heavy Nasdaq was the biggest laggard of the week, falling nearly -3.0%. On the variant front, on Tuesday, the World Health Organization (WHO) warned Omicron is spreading faster than previous strains, and it is probably present in every country of the world. Still, only one confirmed death from the new variant occurred on Monday in the U.K.

Monetary policy took over the financial headlines on Wednesday when the Federal Open Market Committee (FOMC) concluded its December monetary policy meeting and set the stage for the Fed to raise rates earlier and by more next year than it had previously projected. The majority of Fed members now forecast three 0.25 percentage point interest rate hikes in 2022 to fight inflation, whereas they were previously split on whether to raise rates at all. As widely expected, it was also confirmed that the Fed will double the rate of reduction of its bond purchases and conclude the program by March. The Committee provided updated economic projections, showing downward adjustments to GDP and the unemployment rate while increasing its forecast for inflation for 2021 and 2022. Accordingly, it formally removed the “transitory” language for inflation from its statement.

Meanwhile, in Washington DC, President Joe Biden signed a debt ceiling increase into law to prevent a U.S. default. The measure lifts the government’s borrowing limit by $2.5 trillion, which is expected to allow the U.S. to cover its obligations into 2023. Biden signed the bill a day after the Treasury’s estimated date when it would run out of tools to pay the country’s bills. 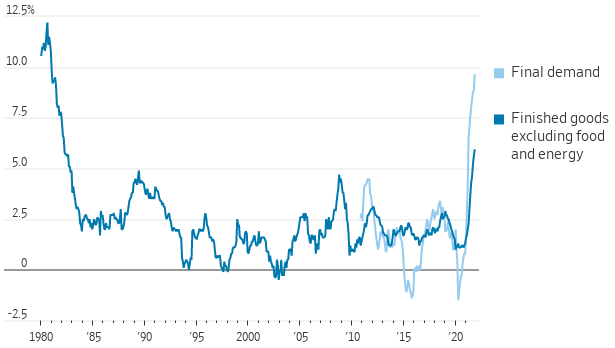 The holiday-shortened week, there are no releases on Friday, December 24, means another week of heavy releases on Wednesday and Thursday. Thursday brings the release of durable goods orders, which are rebounding impressively. The core figure, which excludes the more volatile defense and aircraft orders, is indicating a positive outlook for capital expenditure in the first half of 2022 while robust personal income numbers should allow consumers to continue spending aggressively. 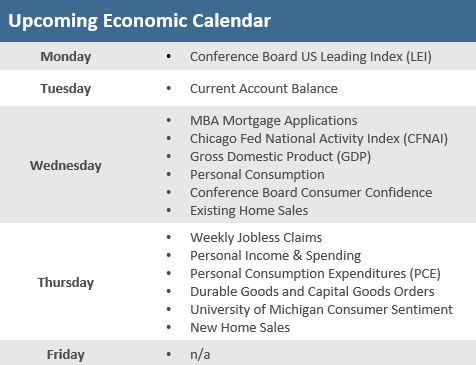 This past week in 1903, the airplane age was born at 10:35 a.m., when Orville Wright headed into a 27-mph twisting wind and flew roughly 10 feet above the frigid sand dunes of Kitty Hawk, N.C., covering a distance of about 120 feet in 12 seconds (source: The Wall Street Journal). 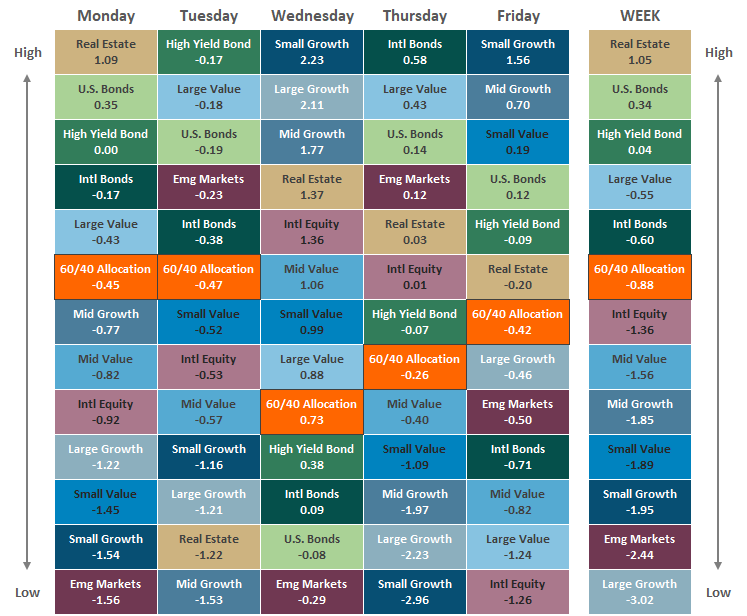