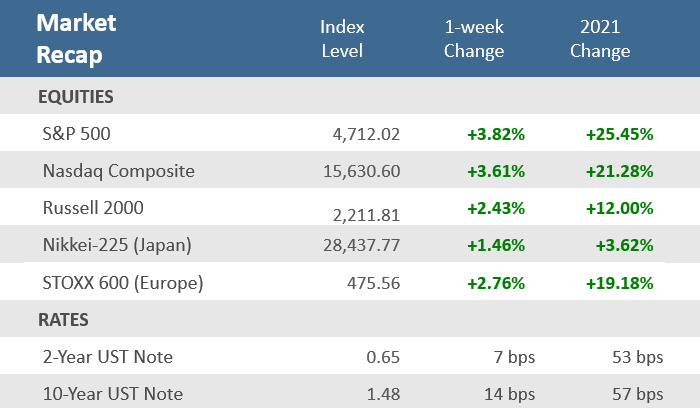 Markets shrug off Omicron and inflation to reach new record

Over the week Omicron was detected in Florida and Texas, making it at least 25 states with the variant. And inflation increased at the fastest rate since 1982. Either of those two data points would’ve weighed heavily on the markets in the prior few weeks. Yet neither were able to bother markets from advancing this past week. The S&P 500 gained +3.8% and closed at a new record high. The technology-focused Nasdaq Composite did nearly as well, with a +3.6% gain. It was the best week since February for both indices and ended a two-week losing streak for each. Even the small cap Russell 2000 Index was able to post a +2.4% advance, breaking a four-week losing streak. It was a key shift in sentiment for investors to be able to shrug off Omicron and inflation concerns. The Cboe VIX Volatility Index tumbled 12 points, or -39%, from 30.7 last week to 18.7 Friday. Data suggests that although the spread of the variant appears more efficient, the impact is likely to be less severe than the prior delta variant. Though the spike in inflation was the highest in nearly four decades, it was also highly anticipated and apparently fully priced into the market. The Treasury yield curve steepened a bit after several weeks of flattening with the benchmark 10-year Treasury note up 14 basis points (+0.14%) to 1.48%, while the 2-year yield was up only 7 basis points to a yield of 0.65%. Perhaps the market is in wait-and-see mode, with producer inflation (PPI), import prices and the Fed’s December meeting and statement upcoming this week.

The November Consumer Price Index, or CPI which measures the cost of a wide-ranging basket of goods and services, rose +0.8% for the month, and +6.8% annually which is the fastest inflation rate since June 1982. Excluding the more volatile food and energy prices, the so-called Core CPI, inflation was up +0.5% for the month and +4.9% from a year ago, which was its fastest rate since mid-1991. Not surprising to most Americans, energy prices led the surge in inflation having risen +33.3% since November 2020, after jumping +3.5% in November alone. Gasoline prices were a primary contributor to the energy inflation, up +58.1% in the last year. Shelter costs, which makes up a third of the CPI weighting, rose +3.8% from 2020, the highest annual increase since 2007.

Consumer Price Index (CPI), percent change from a year ago
All items in U.S. city average

The upcoming economic calendar falls almost entirely on Wednesday and Thursday. The inflation picture will continue to come into focus with producer inflation (PPI) on Tuesday and import prices on Thursday. But most eyes and ears will be tuned into the Federal Open Market Committee (FOMC) rate decision and statement on Wednesday. 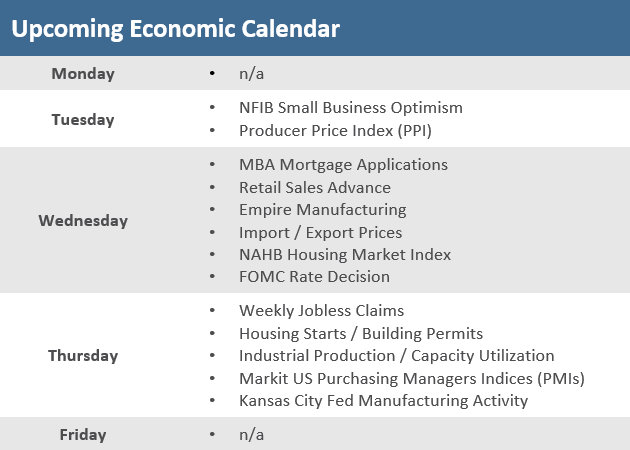 START SAVING NOW — A child born in 2021 that begins kindergarten in the fall of 2026 would attend college between the years of 2039 and 2043. If that child attended an average public in-state 4-year college and if the annual price increases for public colleges that have occurred over the last 30 years (+4.9% per year) continued into the future, the aggregate 4-year cost of the child’s college education (including tuition, fees, room & board) would be $229,635 or $57,409 per year (source: College Board, BTN Research).

BIT IT — Bitcoin, the largest cryptocurrency by market value, plunged more than -20% to $42,000 at midnight Eastern Time on Saturday, December 4, before bouncing back some, according to data from CoinDesk. Other widely traded cryptocurrencies including Solana, Dogecoin, and Shiba Inu coin lost more than a fifth of their value. BITO, the Bitcoin futures ETF that incepted October 19, was down -9.3% for the week, has dropped in 5 of the 7 weeks since its IPO, and is down a total of -26.7% from the IPO (source: WSJ, Bloomberg).

This week in 1906, Grace Murray Hopper (nee Grace Brewster Murray) was born in New York City. She later served in the U.S. Navy, rising to the rank of rear admiral, and invented the Cobol computer language, one of the first software programs enabling computers to be used by non-mathematicians. She also invented the term “bug” for a glitch when, in 1945, she opened a malfunctioning computer and captured a moth inside that had been causing electrical relays to fail (source: The Wall Street Journal). 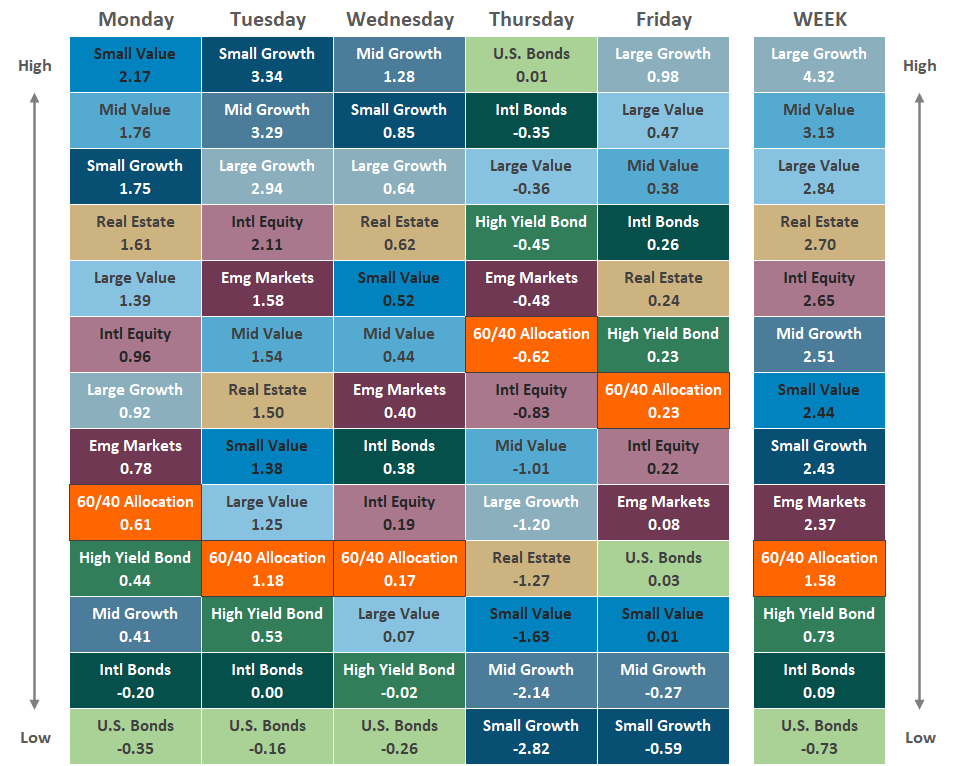