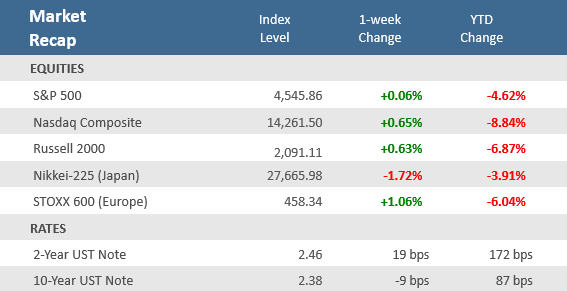 After a two-week rally that was the best since 2020, stocks were a bit uninspiring this past week but were still able to eke out a small gain. The S&P 500 was barely positive with a +0.1% gain, and the Nasdaq gained 0.7%, which were enough to keep their winning streak alive at three weeks. It’s the first three-week winning streak since November 2021. Economic data was mixed throughout the week, but a solid March employment report on Friday helped push stock up for the week. But the decent jobs data also made it more likely that the Federal Reserve will have to stay aggressive with its path of monetary tightening to keep inflation in check.

As a result, the yield on the U.S. 10-year Treasury note fell to 2.38% from 2.47%, but the 2-year Treasury yield jumped up 19 basis points to 2.46% from the prior week, causing an inversion between the two (meaning the shorter-term note has a higher yield than the longer-term note). It was the first time since 2019 that the 10-year/2-year yield curve has inverted, which has sparked a lot of talk about recession. The 10-year and the 2-year curve is closely watched by financial media, and a negative yield spread has anticipated economic slowdown and recession in the past. But another part of the yield curve, the 10-year and three-month yields remain positive and rising; therefore, is not confirming the warning from the 10-year and 2-year curve. The 10-year/3-month yield curve is closely monitored by the Fed and has the longest track record, and success, of anticipating recessions—it has inverted prior to the last eight recessions going back to 1970. Again, it is positive and rising.

With a decent jobs report showing a tight labor market, consumer spending still robust, capital spending by companies expected to stay strong this year, and COVID increasingly becoming de-emphasized, there are still important tailwinds behind the U.S. economy. Markets continue to grapple with the war in Ukraine and on Saturday Ukrainian officials reported they had regained control of the capital city of Kyiv and the possibility of peace talks between Ukraine and Russia seemed to advance. It is far too early to put those in the tailwinds category, but it does appear to be an improvement in the hostilities.

The March Nonfarm Payrolls Employment Report showed that although job growth missed expectations on the headline number, the underlying components were still solid. U.S. nonfarm payrolls rose by 431,000 in March, below Bloomberg’s consensus estimate of a 490,000 rise. But February payrolls were revised higher to a gain of 750,000 from the initial report of 678,000. The Bureau of Labor Statistics said the leisure and hospitality sectors led the gains, followed by professional and business services as well as retail trade. The Labor Force Participation Rate rose to 62.4% from February’s unrevised 62.3% figure, which was in line with expectations. The Unemployment Rate fell to 3.6% from 3.8%, exceeding expectations for a decline to 3.7%. That puts the unemployment rate only one-tenth of a percentage point from its pre-pandemic bottom of 3.5%, which was a 50-year low. The Underemployment Rate—including total unemployed and those employed part-time for economic reasons, along with people who are marginally attached to the labor force—declined to 6.9% from 7.2%. Average Hourly Earnings, a closely watched inflation metric, increased +0.4%, in line with expectations, and ahead of February’s upwardly-revised +0.1% rise. Compared to last year, pay was +5.6% higher, slightly ahead of forecasts of a +5.5% rise. Finally, Average Weekly Hours Worked, which figures into productivity, fell a bit to 34.6 from February’s unrevised 34.7, where it was expected to remain. All in all, the report shows a very healthy labor market and is likely to do little to ease concerns by Federal Reserve Chairman Jerome Powell that the labor market is overheating. 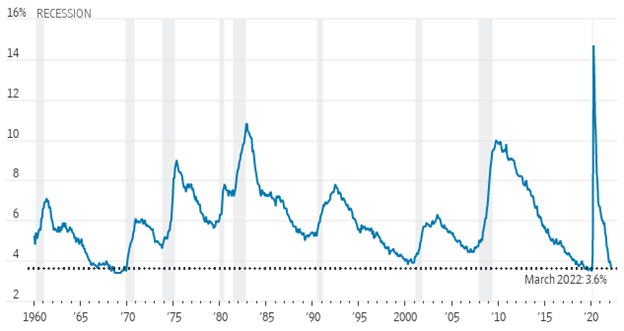 There is little on the economic calendar in the week ahead, and another couple weeks before the next earnings season really gets under way. With the lull in economic and earnings reports, investors will likely focus on Wednesday’s release of the Federal Reserve’s minutes from its March meeting, at which it raised rates for the first time since 2018. Fed speakers will be busy with eight scheduled speaking engagements between Tuesday and Thursday. Investors will be watching for nuances around the discussion on the size of future hikes to the target of the federal funds rate. Of course, any developments around the ongoing Russia-Ukraine conflict will also command attention.

QUICKER THAN EXPECTED – The Fed meeting minutes from 3/17/2021 (a year ago) anticipated that the Fed would not implement interest rate hikes until at least 2023. Instead, the Fed raised short-term rates on 3/16/2022, indicating that it may implement additional rate hikes at each of the remaining 6 Fed meetings scheduled in 2022 (source: Federal Reserve, BTN Research).

BALANCED PORTFOLIO – As of 12/31/2021, the US stock market, comprising 4,266 public-traded companies on the NYSE, AMEX and NASDAQ exchanges, was worth $53.4 trillion. The US bond market (including treasury, municipal, corporate, mortgage and asset-backed debt) was worth $52.9 trillion. Treasury debt ($22.6 trillion) makes up the largest piece of the US bond market (source: Siblis Research, Securities Industry and Financial Markets Association, BTN Research).

Let’s Make a Deal – On this day in 1867, U.S. Secretary of State William H. Seward agreed to purchase the Alaskan territories from Russia for $7 million—a price so preposterous that newspapers around the country immediately tagged the deal “Seward’s Folly” and christened Alaska “the polar bear garden” (source: The Wall Street Journal). 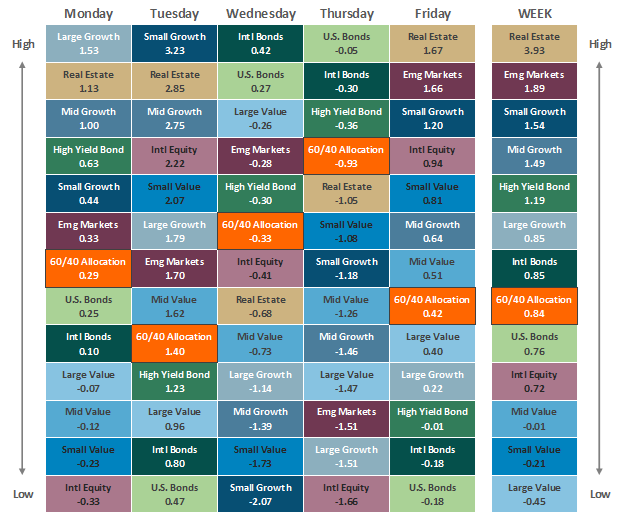